Lycopodium clavatum is a very important remedy in the homeopathic pharmacopoeia. It is haunted by its territory, by the concern of size and greatness. It is the remedy of the authoritarian crisis, of the separation from the symbiosis where the subject is confronted with the paternal function. 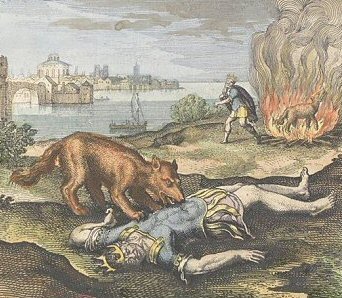 French version of this article

Lycopodium clavatum is a vascular plant. The twigs contain spores which constitute the « lycopodium powder ».

Lycopodium clavatum is a plant of the lycopodiaceae family. Round peduncles rise from it, bearing at their ends two small twin cylindrical spikes, composed of bivalve kidney-shaped capsules. The spores contained in these capsules form the lycopodium powder, which is pale yellow, fine, very light and extremely flammable. Because of this quality it was widely used by munitions specialists, who gave it the name vegetable sulfur.

The name wolf’s foot clubmoss or wolf-paw clubmoss would be linked to the aspect of the young branches which can evoke the wolf’s paw.

It is important to mention the wolf because certain aspects of this animal correspond to symptoms triggered during the pathogenesis of the remedy. This is very characteristic when comparing the life and habits of the wolf with the homeopathic medical material of the remedy. The comparison shows us that certain homeopathic symptoms have a correspondence in the form of the substance. We can thus observe real archetypal symbolic symptoms of the substance.

The wolf in the collective unconscious

One of the most important notions in the life of the wolf seems to be the acquisition of territory, along with the differentiation of generations and sexes. Of course, these notions are common to most species, but they seem to be particularly fundamental in the wolf.

The observation, in our western collective unconscious, of the almost obsessive presence of the wolf, particularly in the imagination of the child, accentuates its importance in the depths of our unconscious. It is possible that in other civilizations another animal takes its place.

In the dreams of a child, in fairy tales, in the children’s games of our countries, the presence of the wolf is constant. This is all the more surprising when we take into account the derisory place of the wolf in our daily life and the difficulty to preserve their species in our countryside.

Emblem XXIV of Atalanta Fugiens (Michael Maier) shows a wolf devouring the body of the inanimate king (illustration above). The text states that through his own death, he is restored to life and strength.

« Make sure that you capture the ravenous wolf.

To appease its gluttony, throw the body of the king

To satisfy his greed ; then place it on a pyre ; the fire

Excited by Vulcan will reduce it to ashes.

Operate thus often and you will see the king,

With the heart of a lion, rise proudly from death. »

We find the pathogenesis of lycopodium clavatum is in Hahnemann’s Chronic Diseases.

The worry of not occupying its territory

Lycopodium is worried about not occupying a large enough space. It seeks to consolidate it. The passage from a wild to a social state is only possible by taming the territory.

Lycopodium subjects are centered on male authority. They want to be the center of the family, have the predominance of the genitor, embody masculine strength, be the father, the leader, and imagine themselves to have irresistible authority. Filial duty is their strong (or weak) point. Lycopodium subjects are intellectually brilliant but physically weak, fearful, cowardly, angry, and authoritarian.

The life of Lycopodium looks like a checkerboard, a kind of chessboard, an arena, where two protagonists, father and child, great and small, vassal and sovereign, shadow and light, yin and yang, masculine and feminine, confront each other.

The chessboard symbolizes the theater of this fight, with oneself and/or with others, to conquer a territory, to checkmate the king.

Basically, Lycopodium is afraid : afraid of not having a territory. This fear may first be expressed in the solar plexus, the location of the subject’s vitality. This fear can have different objects : others, the evening, solitude, etc. Lycopodium subjects have a knot in their solar plexus. They feel fear in their stomach.

Lack of confidence and desire for social dominance

Lycopodium dreads solitude and has a desire for company. They can appear self-confident at times, but have a fundamental lack of self-confidence and self-esteem, which they have to compensate for all their life by an attitude of superiority and social domination.

To avoid feeling insecure, Lycopodium compensates. They try to mark out a territory, which on the internal level corresponds to an active search for identity and on the external level to a very clear tendency to occupy the space which surrounds them.

This activity will be clearer on the intellectual level than on the physical level. One should not step on their toes. Besides the fact that they can be very authoritative, they have an innate sense of territory. Lycopodium children defend their bedroom with great conviction, especially when little brothers or sisters intrude.

Fear of being weak and small

Lycopodium is afraid of being small, of staying small, of having to look up at the world. Their fundamental fear is that of being weak and small, of being a small child. We can imagine Lycopodium putting on high heels. They are so eager to see the world at the same level as the others, and even higher, that they do everything to raise themselves up.

It is true that Lycopodium is a creeping plant that sometimes stretches out far on the ground and can reach a meter in length and sometimes more.

Lycopodium dreams of giants. The dream expresses their problem. Lycopodium subjects compensate for feeling small by projecting a David versus Goliath fight, which they obviously win thanks to their cunning and intelligence.

Lycopodium is the center of the family, has the authority of the father, and the filial duty as strong point (or weak point). Lycopodium subjects compensate for their basic fear by attributing authority to them through the law.

The unconscious need for a male authority figure or its equivalent leads Lycopodium to an inflation of authority. This is the domain of the father or the paternal function.

For boys, there is often a history of a dictatorial father who must be eliminated, a castrator, and for a girl, an image of animus where she remains imprisoned by the memory of a father who triggers a mixture of endogamous love and hate.

Many symptoms of lycopodium are located on the right side

Each person is different, and the paternal function may be located on the left for some. Nevertheless, in the classical meaning of the collective unconscious of language and symbols, right is synonymous with authority and rigor.

Many symptoms of lycopodium are located on the right : e.g. angina on the right which is improved by drinking hot (or sometimes cold) beverages. The leader’s speech gets stuck in the throat, like an authority figure quick to get angry. A blocked right nostril is often suggestive of lycopodium. They may have a right inguinal hernia. An enlarged and inflamed inguinal region marks an inflation of their drive to act and to procreate. The right inguinal region underlines a tension in the inguinal-genital area, a kind of overcompensation that shows the fear of « too little ». They may present with rashes, and pain that is often located on the right.

A fundamental lack of confidence

Lycopodium subjects fundamentally lack self-confidence. They are afraid of not having limits, landmarks, or laws. This deep fear is similar to the fear of being attracted to the parent of the other sex, of not having a paternal guardian capable of setting limits, or the energy necessary to leave the nest.

It is the terrible anguish of not being able to leave the primitive « burrow » or to be swallowed up in a regression which could become mortifying. It is also the temptation of the cursed transgression or at least the choice of a partner with a big difference in age (a father with a woman who could be his daughter or a woman with a child man).

Children want to do as well as their mother or father. They do their best to obtain their autonomy for two reasons : first and foremost to get out of the parental cocoon, to make themselves happy, but also to please those who raised them and thus obtain a certain recognition, which in turn results in personal fulfillment.

A remedy of anger, passion, energy and strength

Lycopodium is a liver remedy. Lycopodium decompensates. It is of course a remedy of anger, passion, energy, and strength. This « bile » flows into the joints and causes « rheumatism ». It is a remedy of articular pains, a remedy of gout. The digestive system reacts in the foreground with pains of a colic type.

In the collective imagination, there is a fearsome beast capable of biting or eating little girls, children, and people.  This beast can reach extreme dimensions, for example in the story of the Beast of Gévaudan, which killed more than a hundred people in the 18th century and illustrates this terrifying aspect of the wolf. There is certainly truth in the stories of the time, but the imagination of the collective unconscious has probably added frightening aspects to this mythical animal. It is an aspect of the fearsome shadow of the father, of the devastating animus that sleeps in our unconscious.

The dictatorial character is one of the best known aspects of lycopodium. It is a « dictator », the one « who commands ». Of course the abusive authority of the law can lead to dictatorship, as an attempt to resist what is experienced from within as a danger and a threat, due to a lack of self-confidence.

One of the most striking characteristics of Lycopodium is also its tendency to seduce, its donjuanism, which can go as far as obsession. It particularly seeks easy conquests.

Intergenerational trauma and the healing power of anger (part 3/3)