In order for a child to develop a healthy sense of identity, relatedness and self-care system the primary caregiver must act as a mirror. However, for a narcissistic caregiver the infant only exists as an extension of themselves. In a complete role reversal the child is asked to reflect or mirror the narcissistic caregiver and only feels valued and safe in so much as they succeed in being a positive mirror for their caregiver, and others after that. 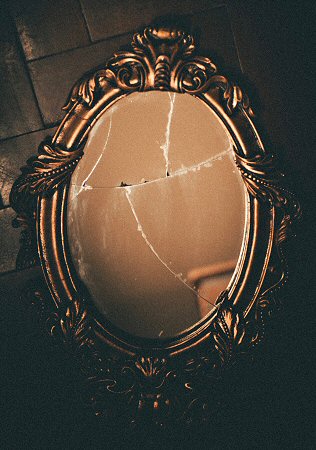 We have all witnessed the near-magical sight of a person communicating lovingly with an infant. Before words, there is eye gazing and the imitation of facial expressions, followed by cooing and playfully communicating through gurgling sounds. A primary caregiver who is attentive and tuned in to their child is usually able to figure out from their behavior and all sorts of non-verbal cues (type of cry, facial expression, silence, visual cues, looking away, cooing, stretching out of arms, etc.) what the infant needs at any given moment. A big part of this communication is being able to accurately reflect what the child is feeling and thinking.

In order for a child to develop a healthy sense of identity, relatedness and self-care system the primary caregiver must act as a mirror.

Adults are not only there to ensure the child’s survival in terms of food, shelter and even loving warmth and protection, but also to help the child make sense of the world and their place in it. If the infant receives enough loving mirroring, growing up in the reflection of tender parental love, this validation of their feelings and thoughts is internalized. This leads to a feeling of self-worth, self-acceptance and self-awareness, which subsequently enables the experience of social acceptance and competence.

A lack of adequate mirroring results in shame and subsequent difficulties with trust and relatedness in later life.

In her book Mother-Infant Attachment and Psychoanalysis : The Eyes of Shame Jungian therapist Mary Ayers argues that a lack of adequate mirroring in the first six months of life results in a fundamental feeling of shame. Whether the shame is felt consciously or not, this core feeling permeates and colors every affective experience a person may have.

There are many reasons why a primary caregiver might not be able to provide that adequate mirroring, regardless of whether the child is loved or wanted. For a person who continually has to deal with their own unrelenting suffering, it’s very difficult to give their full attention to connecting with an infant who needs them. It is even harder when their own support system fails them and they can’t get a break, not from their problems and not from the all-encompassing demands of parenting.

It’s also tough to mirror a child for those who haven’t received adequate mirroring themselves, or if deep-seated fears prevent them from making that intimate connection. An extreme case presents itself when the primary caregiver is severely narcissistic.

For a narcissistic caregiver the infant only exists as an extension of themselves.

The growing child learns very quickly that their feelings and thoughts are unimportant and comes to the deep-seated conclusion that he or she is inherently unlovable. Their value is determined only by what they can do or be for the narcissistic person. They grow up with no inherent self-worth, and nothing they do or are is ever good enough, as evidenced by the continuing lack of love and validation from the narcissistic caregiver, as well as a complete disregard for privacy and personal boundaries.

No matter how much the child sacrifices to please them, they can never gain their caregiver’s approval, yet continually keep trying. The child grows up with constant anxiety that their needs won’t be met.

Not only is there an extreme lack of mirroring, in addition a complete role reversal comes into play : the child is expected to admire and emotionally, and eventually physically, take care of the caregiver.

The child is asked to reflect or mirror the narcissistic caregiver and only feels valued and safe in so much as they succeed in being a positive mirror for their caregiver, and others after that.

A symbolic expression of this harmful dynamic is presented in Grimm’s fairy tale of Snow White, when the queen, Snow White’s evil (and very narcissistic) stepmother turns to her magic mirror and asks : Mirror mirror on the wall, who’s the fairest of them all ?

Narcissists desperately need to be mirrored. That is the most important thing, as their narcissistic wound also includes a severe lack of mirroring in their own childhoods. And if extreme narcissists cannot have the admiration and service they so desperately seek, they will go to extreme lengths to get it, no matter how much they hurt the people around them. Snow White’s stepmother is even willing to kill in order once again to be considered the fairest of them all.

The abuse can be brutal (on a physical, verbal or even non-verbal level) or subtle and cumulative, mixed in with loving words and gestures for optimal confusion.

Some examples are lack of respect for privacy and personal property, disparagement under the guise of humour, belittling of the child’s dreams and interests in the name of education, not taking the child seriously when in pain or discomfort, withdrawal of love as a tool for manipulation, and so on.

At a fundamental level, narcissists are unable to see others as separate human beings with their own life, rights, wishes, needs, and dreams. Others are either tools to help them obtain what they want, or an extension of themselves. Sadly, this includes the children in their care. A narcissistic parent wants their children to be beautiful, intelligent and successful, so that it reflects positively on them. However, the child should never be more beautiful, intelligent and successful than their narcissistic caregiver.

What’s important is the outward appearance of the narcissistic caregiver, and not the inner happiness, growth and fulfillment of the child. The caregiver may shape-shift between being a tyrant or bully and being helpless and needy, but the focus is always on their needs, and not those of the child.

When children of narcissists grow up, they often present problems with identity and boundaries since as a child their primary caregiver refused to allow them to be their own person, at the risk of being abandoned. As adults they may feel overwhelmed by the unconscious wishes of others, unable to distinguish them from their own.

As adults they may grow up alternating between being in service to those they are afraid to lose the love of, severe rage and resentment for not being free to lead their own life, and guilt and shame over never being able to live up to the unreasonable expectations set during their childhood and perpetuated by their inner critic.

Even when cut off from the initial toxic relationship, children of narcissists may continue the abuse and abandonment they suffered by all kinds of destructive behavior, turned towards others and/or themselves. The first may come in the form of narcissistic behavior and bullying of people over whom they have authority. The latter may show up in subtle forms or more obvious ones such as dysfunctional eating and drinking behaviors, sex addiction, shopping addiction, etc.

In addition, the unconscious rage and terror of being rejected and abandoned may present itself as physical symptoms. The inner heat of anger surfaces in inflammation according to Jungian analyst Dariane Pictet.

When there is no obvious physical origin, skin problems such as eczema and psoriasis may symbolise the lack of boundaries between the child and narcissistic caregiver, whereas intestinal issues, such as spastic colon could symbolically represent the fact that the poison of the narcissist cannot be digested.

In asthma the airways in the lungs can become inflamed and narrowed at times. The lungs can no longer do their work properly : the all-important exchange between vital oxygen (from incoming air) that enters the blood and toxic carbon dioxide (a waste gas from our metabolism) that leaves the blood. Lung problems could potentially symbolise the fact that in a narcissistic household a child’s ability of knowing what to take in (from life and people) and what to reject or defend against is compromised.

In addition, the breath of life can no longer penetrate the abdomen, considered the centre of emotions, representing the cut-off from their own sustaining life force.

In her online lecture Growing up with a narcissistic parent Jungian analyst Dariane Pictet uses the fairy tale of Snow White, not only to demonstrate the effects of narcissistic parenting, but also to illustrate how we can heal from this particular kind of toxic upbringing.

See next article Snow White – The legacy of a narcissistic parent (part 2/4) for further reading.