When Death Mother, a severe form of the Negative Mother archetype, runs the show at home, our primary caregiver gives us the same unconscious death stare as the Greek figure Medusa. As adults we have internalized her archetypal energy, projecting her and seeing her in others, and/or directing Death Mother onto ourselves and/or others. 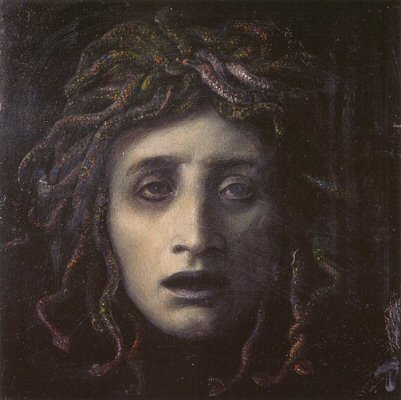 Death Mother, a severe form of the Negative Mother archetype, was first mentioned by Marie-Louise von Franz. The concept was subsequently broadened and popularized by Marion Woodman. In an interview with Daniela Sieff, Marion Woodman says :

If we face Death Mother while growing up, we will inevitably internalize her, and if we have internalized her, then we will either project Death Mother onto others – seeing her in our boss, our lover, or our children, or we will act her out by directing her energy onto others, and/or onto ourselves. Until we begin to examine what we are carrying within our psyches, we risk being possessed by the Death Mother archetype.

The archetypal energy of Death Mother has the most potential to harm a person in the long term when it is carried unconsciously and unchecked by their primary caregiver.

Death Mother is often represented symbolically by the Medusa, a figure from Greek mythology. The monstrous Medusa was one of the three Gorgon sisters : the only mortal one. She had wings and living venomous snakes as hair. Anyone who gazed into her eyes turned to stone.

When Death Mother runs the show at home, our primary caregiver gives us the same unconscious death stare as the Medusa. It is sometimes hard to pinpoint any concrete words or behavior, but deep down we feel that we are not acceptable, that the world would be a better place if we were different, if part of us were dead, or if we had never existed at all.

And sometimes the words are concrete and very harsh. When we protest, we find out first-hand that Medusa cannot be confronted directly, but that her deadly glare must be reflected, as Perseus did using a mirror. If we decide to defend ourselves directly or complain that we are hurt, we suffer a secondary hit in the form of a denial or dismissal which often criticizes us even further. “I didn’t mean that. Surely you know me better than that.” “I was just joking. You’ve got no sense of humour.” And an all-time favorite : “Why are you so sensitive ?”

Reality is turned upside down, and we are manipulated into distrusting our intuition and gut feelings. In addition, we are shamed for our reactions (whether we are angry or hurt). We do not realize that these are normal reactions, as no one can stay balanced while being constantly provoked.

We try to conform, to become better, but it’s impossible to please a narcissist in the long run. Whatever we do, it’s never the good thing. Over and over again their ever-changing demands set us up to fail, and we never get the validation or love we so desperately seek from them, eventually overflowing with guilt over our self-perceived inadequacy.

In addition, the narcissist binds us to him or her in a powerful way and often prevents us from forming other meaningful relationships where we could potentially get love, mirroring and validation.

Eventually we may feel like we’re in a double bind. On the one hand we cause unhappiness because we exist, on the other hand we would cause even more unhappiness if we died. Whatever we do, it is bad. There is no escape, no hope. We are fundamentally flawed and there’s nothing we can do about it.

This is what it might feel like if you’ve grown up with a narcissistic primary caregiver and you’ve internalized their Death Mother energy, subsequently directing it onto yourself.

In addition, you may also project your internalized Death Mother energy onto others and attract people in your life who direct their own Death Mother energy onto you. You keep being subjected to the same wounding over and over again, which reinforces your (sometimes unconscious) fear and belief that you are in essence worthless, or at least deeply and fundamentally flawed.

Marion Woodman, who has done a lot of work on the connection between psyche and soma, says that people who grew up feeling unacceptable to their caregivers will have developed a hyper-vigilant nervous system.

Our cells will have been imprinted with a profound fear of abandonment ; as a consequence our body will numb-out the moment we feel threatened. (Interview with Daniela Sieff)

Like Snow White in her glass coffin (see part 2/4), we dissociate and lose contact with our deepest feelings and our body. As those who looked into Medusa’s eyes, we are turned to stone.

As soon as we realize that we are no longer pleasing somebody, we freeze ; we are thrown back into our belief that we are unlovable, which then activates our ever-present, but unconscious, terror of annihilation.

Whenever our hyper-vigilant nervous system sounds the alarm that there is unconscious hostility in the environment, even when its source has nothing to do with us, we become over-sensitive and even the slightest comment, look or sly reaction is felt as life threatening.

Then life is experienced as a minefield in which we are knocked down by explosions that are inaudible to others.

Jungian Analyst Donald Kalsched, who has written a lot on the effects of early trauma, explains in his interview with Anne Malone how dissociation might show up in dreams.

The dreamer might be suffering an encounter with frightening contents : let’s say the dreamer is swimming in a lake near her childhood home at precisely the spot where at age four she almost drowned, and suddenly a large snake approaches in the water. As her fear mounts, suddenly the dream changes, and she’s sitting in a sunny meadow with her favorite cat, feeling blissful.

This break in the dream narrative shows us a dissociative defense : a place where her psyche is unable to metabolize unbearable anxiety (related to the early trauma) and the dream maker simply changes the story.

Another common effect of growing up with Death Mother is the out-of-proportion experience of anxiety surrounding anything new and unknown. In Marion Woodman’s words :

Being born had taken me into a hostile and dangerous environment, and that seeded a bone-deep ambivalence about change and growth.

Because the terror of annihilation cannot be felt consciously, our desperate attempt to defend ourselves from Death Mother’s poison, symbolized by the poisonous comb and apple in the fairy tale of Snow White (see part 2/4) and the venomous snakes of Medusa’s hair, may find expression in our body.

We may develop defense mechanisms that manifest themselves in an armor of fat, oedema, vomiting, anything to keep the poison out. Ultimately, our body may turn against itself as it does with cancer or auto-immune diseases. Death Mother has been incorporated into the fabric of our cells.

But Medusa wasn’t always a monster. As early as the fifth century BC vase painters and sculptors started depicting her as stunning, yet terrifying. In a late version of the myth the Roman poet Ovid described her as a beautiful maiden, known for her lovely hair.

Medusa was a priestess of Athena and, as such, had taken a vow of chastity. Poseidon took an interest in her and pursued her fervently. According to different readings of the myth, he either seduced or raped Medusa in Athena’s temple. We do not know whether she gave her consent to this sexual encounter, or if she was even in a position to make that decision.

Willingness (and even desire) to have sex with a person who has authority or power over you does not imply consent, as is reflected in laws on age of consent and strict prohibition of having intimate relations with a student, patient or employee. The person in power carries full responsibility for respecting the appropriate boundaries.

All we know is that there was an imbalance of power between Medusa and Poseidon, one of the leading deities of Ancient Greece, that her choice to remain a virgin and be a priestess was not respected, and that their intimate relations destroyed Medusa’s life.

Athena was furious that the sanctity of her temple was desecrated, by one of her priestesses no less. She couldn’t do anything to the powerful Poseidon, and so she turned Medusa’s beautiful hair into writhing poisonous snakes and cursed her with a gaze that turned anyone to stone.

Athena effectively destroyed any hope that Medusa could ever know love or happiness.

This is another aspect of what growing up with a caregiver who is possessed by Death Mother does to us : we are disconnected from love, unable to ever experience it. Everything good in our life is, or becomes, poisoned.

We are also cut off from anything that can bring us meaningful and lasting joy, pleasure or happiness. Instead we pursue endless hollow distractions in a desperate attempt to find what we’re missing.

We confuse our need for spirit with alcohol. In seeking to live the archetype of union, we get hooked on compulsive and meaningless sexuality. Our unfulfilled desire for nurturance is concretized in an insatiable hunger for chocolate and food. Concretized metaphors destroy our lives. When we turn to the concrete, it poisons us.

Medusa is eventually murdered and decapitated by the Greek hero Perseus, and her severed head is used as a weapon to turn Perseus’s enemies to stone.

In the original poems of Ovid there is no mention of Medusa’s experience of suffering or even her point of view. She has no voice. Instead, the heroic actions of Perseus are praised.

Over time, artists such as the 17th century Flemish painter Rubens have focused more on Medusa’s experience, and in modern and contemporary times we have finally started to give her a voice, as chronicled in the article Hidden from View : The Medusa Myth from Ovid’s Metamorphoses to Peter Paul Rubens.

In the next article Snow White’s awakening – Healing from narcissistic parenting (part 4/4) I will discuss how we can heal from growing up with Death Mother and how Snow White wakes up from her glass coffin and becomes whole.